Slow Cooker Apple Butter is a delicious topping you need for breakfast. This apple jam is perfect on toast, biscuits, and everything between!

One of the quickest ways to spruce up breakfast and make it something special is to serve up a delicious spread, butter, or jam. A good spread or jam tastes great on whatever toasts or biscuits you’ve got at the breakfast table. Who doesn’t love something sweet in the morning? While there are plenty of these spreads you could fix up, few are as simple and delicious as Slow Cooker Apple Butter.

Apple Butter Jam has been around for centuries as a way to get the most out of your apples. By cooking apples and down and caramelizing them into this jam-like spread, you’re able to make something delicious that’ll last for months if stored properly. I doubt you’ll let your apple butter sit that long: this stuff tastes good on near-anything. Spread on toast, biscuits, scones, croissants- there’s even recipes online for apple butter pork chops!

Apple butter is delicious- plain and simple- and it’s so easy to make some with your slow cooker or crockpot. We’ve got all the basic stuff covered in the recipe below: the best apples for apple butter, how long apple butter lasts, et cetera. Just follow along and make some of this stuff up: we’re certain this stuff is going to be your go-to spread or topping this fall season!

Enjoyed this recipe? Try these other apple recipes next!

How to make Apple Butter

Don’t worry, the slow cooker will do most of the work for you. Here’s how the recipe is going to go:

There’s just a bit of prep work you have to do before starting. After coring, peeling, and slicing your apples, mix up the sugar and spices.

Toss your apples into the slow cooker and pour the spiced sugar over top. Put the lid on and cook on high for an hour before dropping the heat down to low and letting cook for another 10-12 hours. Be patient- it’s worth it!

Half a day later, and your apples will have cooked down into a lumpy, dark-brown mush. To blend, either use an immersion blender or process in batches in a normal blender.

Keep the cover off your slow cooker and let the apple butter cook- on low- for another hour or two. In this time, it’ll start to thicken up a bit. When it’s thickened to your liking, cut the heat and let your apple spread cool for a bit.

Once cooled, you’re free to enjoy your apple butter! For storage, transfer to an air-tight container and keep in the fridge. If you’re wondering “how long does apple butter last,” know that it could be safe to eat for up to a year in the fridge- it’ll last a while! For best taste, though, try to enjoy within 3-6 months of making. 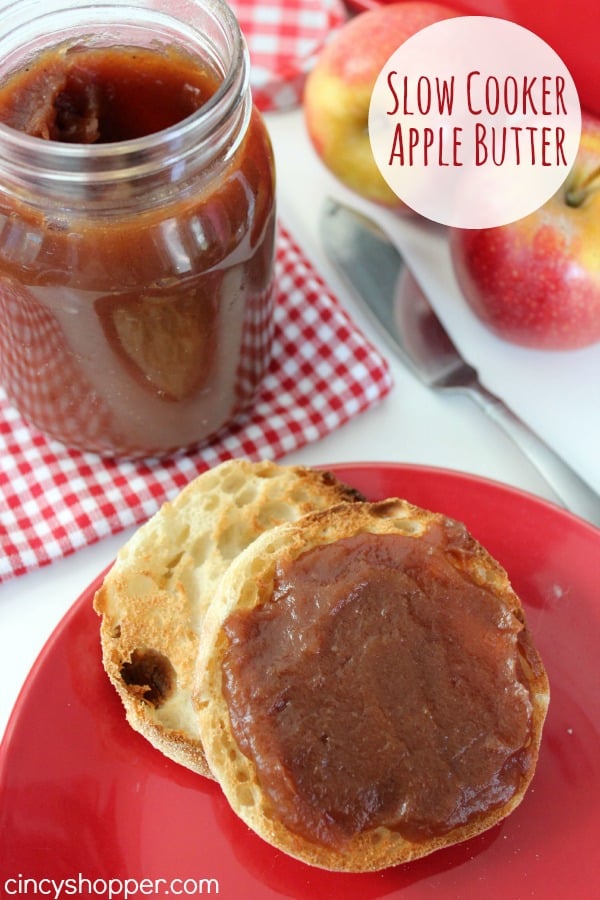