This Orange Creamsicle Icebox Cake is loaded with creamy, dreamy orange and vanilla cream flavor. Since it is a no-bake dessert requiring a few ingredients it’s so easy to make!  It would be great for your next summer bbq treat. 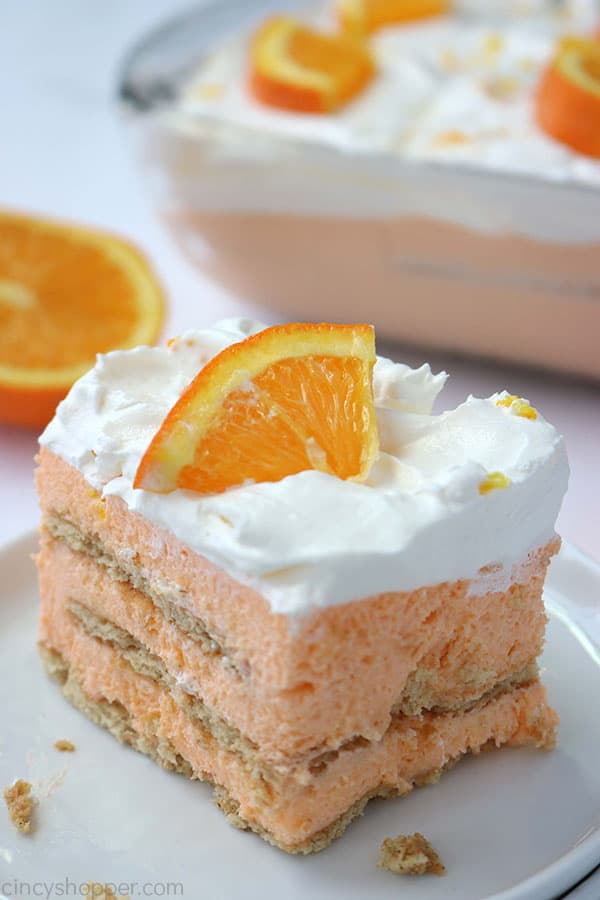 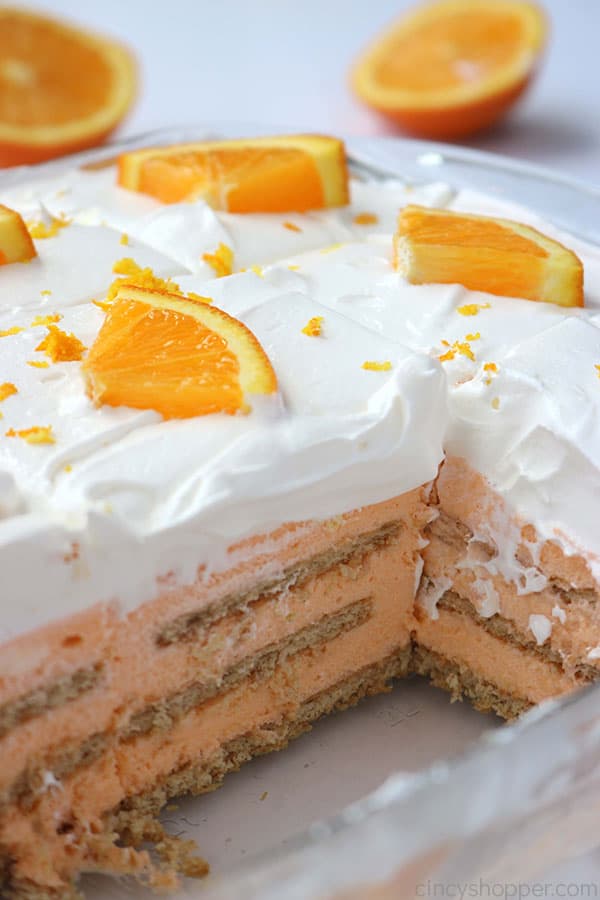 If you are a fan of icebox cakes, this version is life changing and probably won’t compare to any other dessert you’ve ever had. Similar to an Orange Creamsicle popsicle but even better! It is the ultimate warm-weather dessert 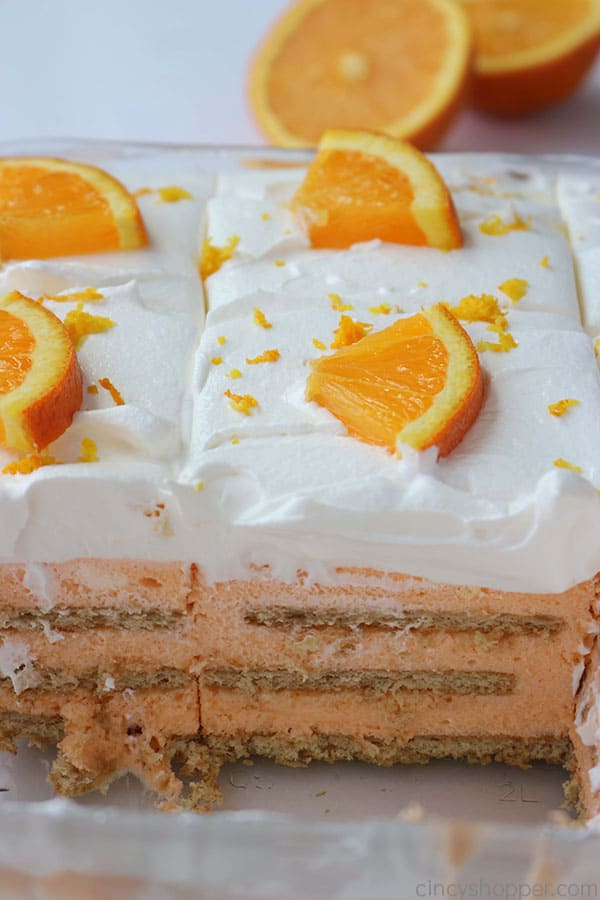 What is an Icebox Cake?

Years ago, the refrigerator was called an icebox. I recall my grandfather calling it that as a matter of fact. Typically housewives would make an icebox cake with layers of whipped cream and chocolate wafers and then chill in the fridge. They liked easy recipes even back in the old days. I am sure they used fresh whipped cream but nowadays we have Cool-Whip to make the dessert even easier. 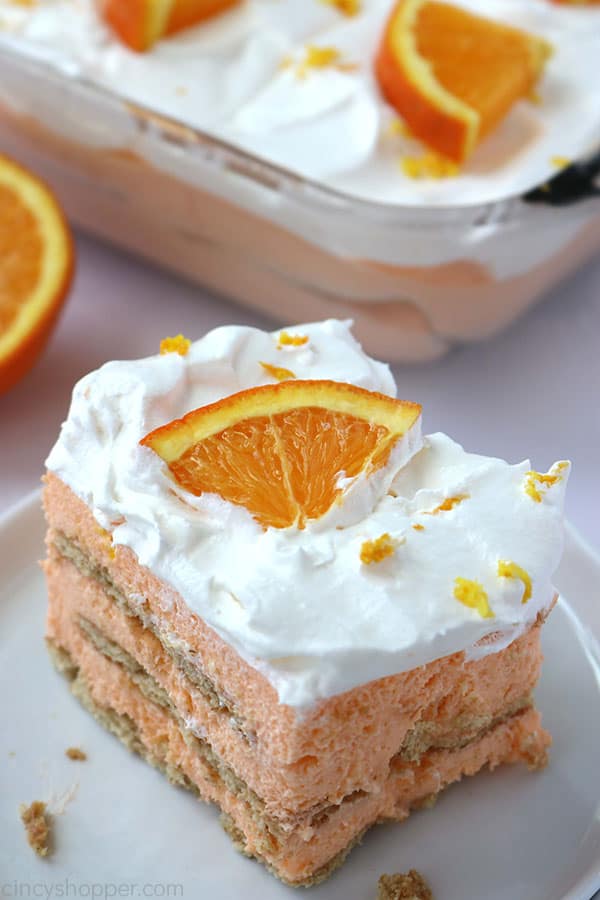 Why is Icebox Cake Perfect for Summer?

Let’s be honest, no one wants to bake during the summer months. Icebox cakes are my favorite to make. They’re VERY easy. Anyone could make one of these cakes, even the kids. Plus, because it’s a cold cake, that will keep everyone cool during the hot weather. I know my kids enjoy anything that is cold for summer treats. 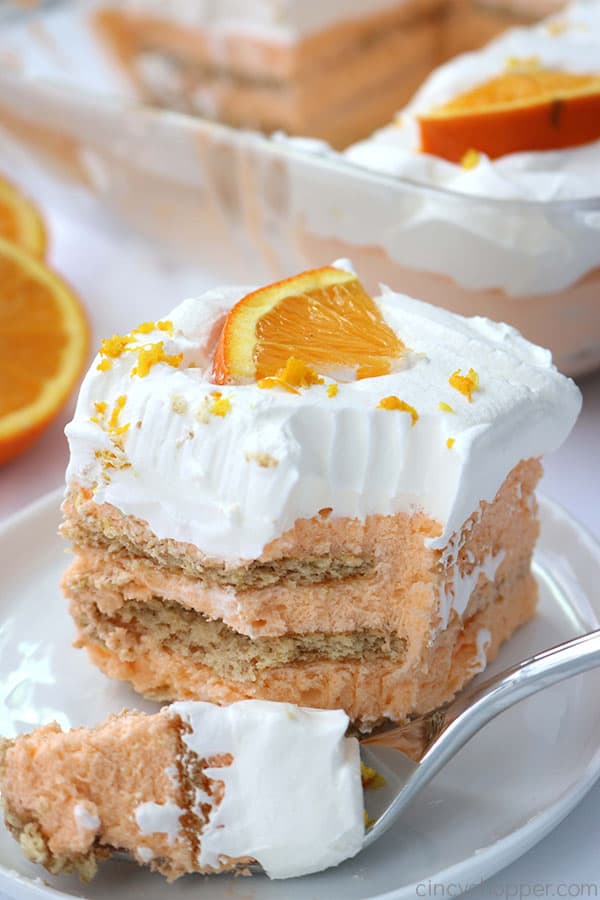 Why Use Cool Whip Instead of Heavy Cream?

I know you may be wondering why I used store bought whipped topping, instead of making my own whipped cream. It’s kind of like why I don’t make my own peanut butter at home, it’s just easier. When you’re a busy mama and have places to go, sometimes you need to take shortcuts. Plus, I really enjoy the way Cool Whip stabilizes the filling in an icebox cake. 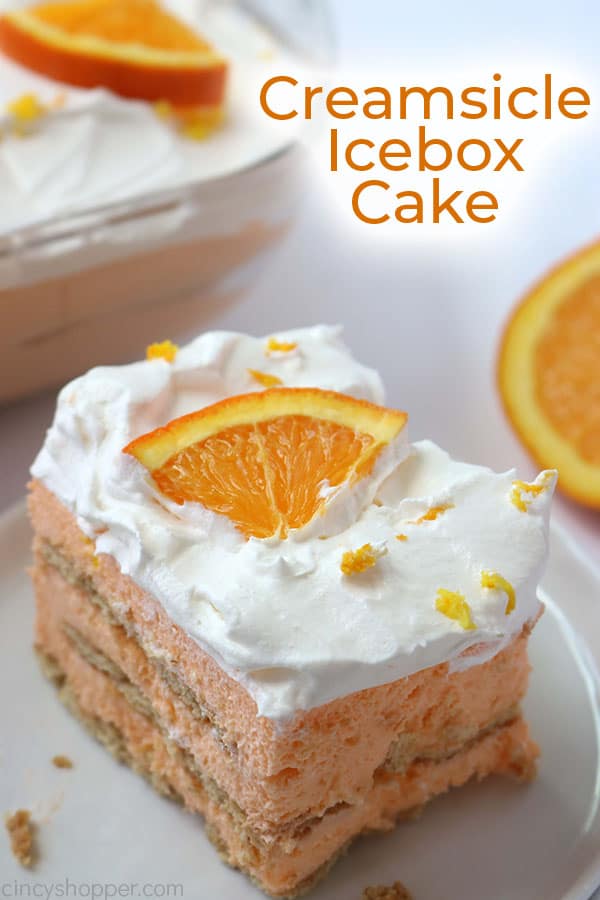 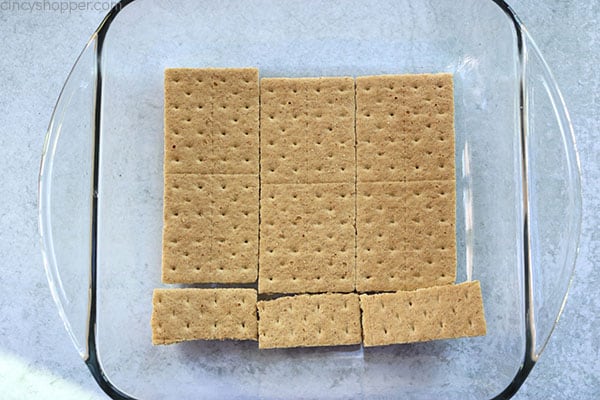 Start by layering the bottom of a glass pan with graham crackers. I always think graham crackers make the best crust, especially in no-bake desserts. I considered using Nilla wafers as I have with cheesecakes. If you should attempt that option, please share your results. I bet Nilla cookies would be amazing. 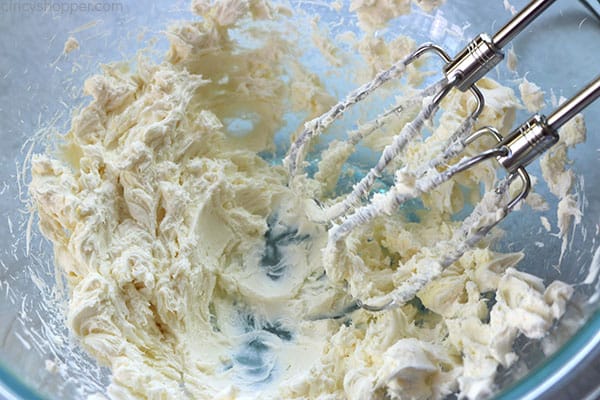 Softened cream cheese is such an important part of this icebox cake. You’ll want to leave it out at room temperature, so it becomes very creamy when beaten with your mixer. 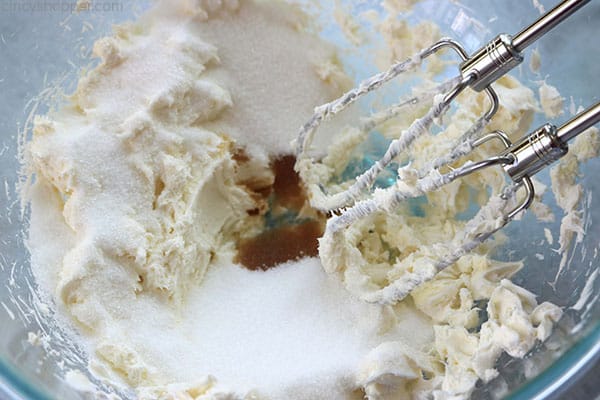 Next, you’ll want to add the sugar and vanilla and beat until creamy. Once you have a very smooth consistency, move on to the next step. 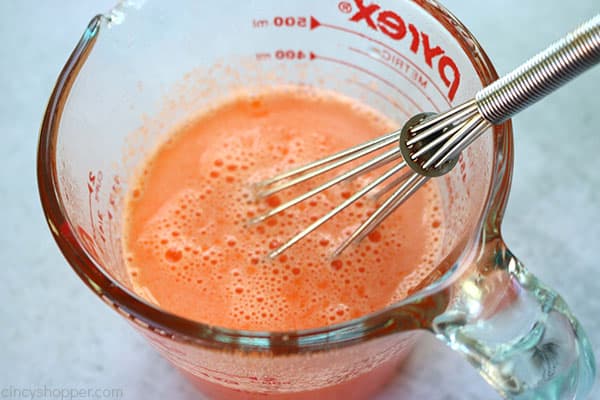 For this Creamsicle Icebox Cake, you’ll be using orange JELLO. It’s as simple as combining the Jello and hot water. Whisk all of this together, until it’s dissolved. Allow the Jell-O to cool for about 15 minutes. Some people use pie filling or pudding mix in an icebox cake, but in this case, we’re using Jello! 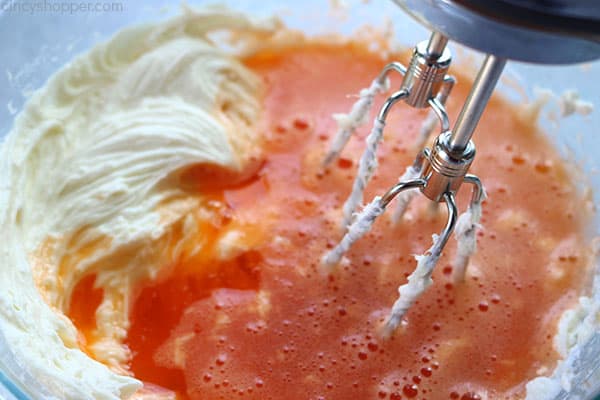 Beat the Orange Jello mixture and the cream cheese mixture together. 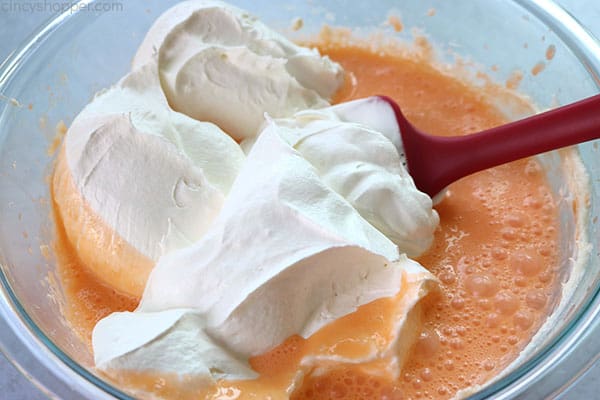 You will want to fold half of the Cool Whip into the mixture. As you can see, it makes it very light and fluffy looking. 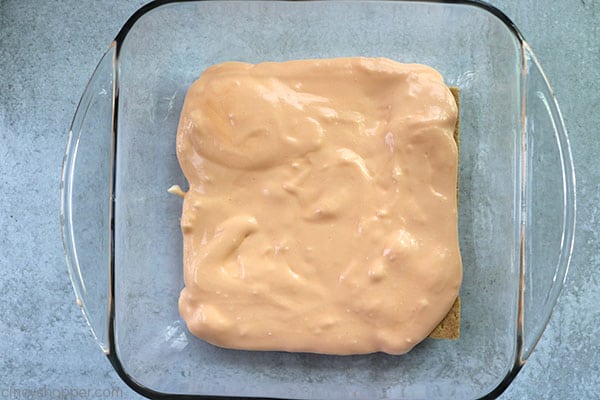 The next step is pouring the mixture over the graham cracker crust. Can I just say…..YUM?!? 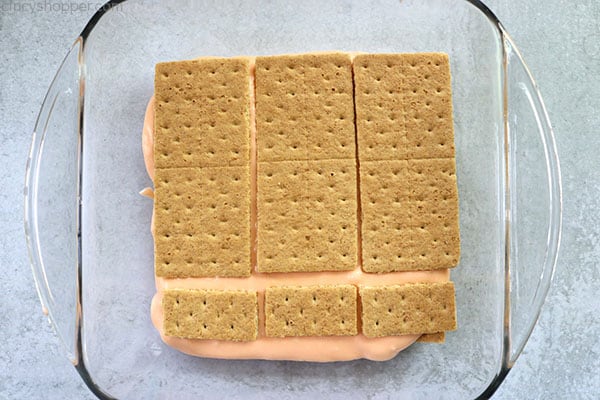 Add another layer of graham crackers into the “in-progress Icebox Cake.” Isn’t it looking so delicious? 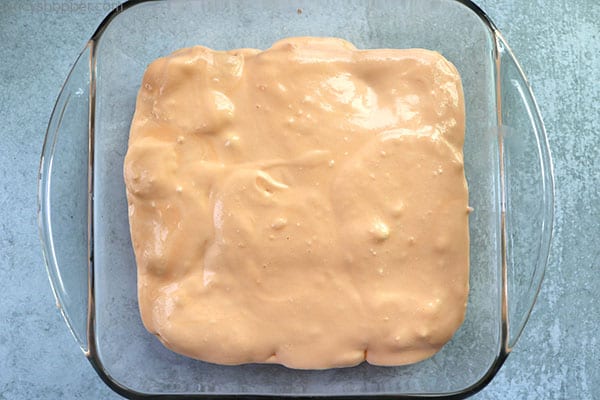 One more layer of the orange creamsicle! My mouth is watering as I put this recipe together. I have really grown to appreciate this cake. 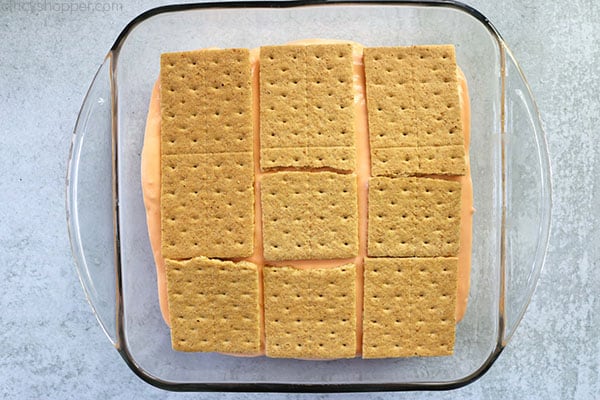 The last layer of graham cracker crust is happening now. This is going to be worth every single layer, I promise. 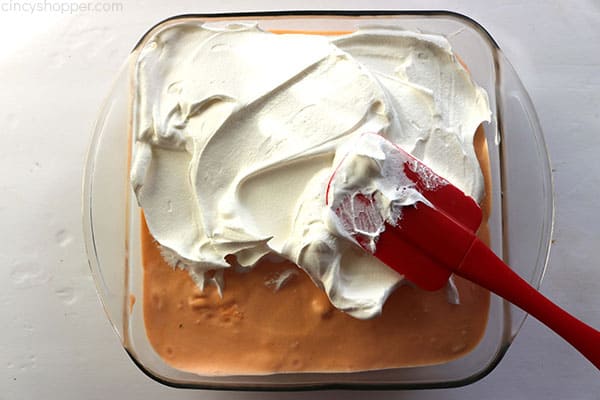 Add a layer of Cool Whip and spread around using a spatula. Make sure you get those corners. 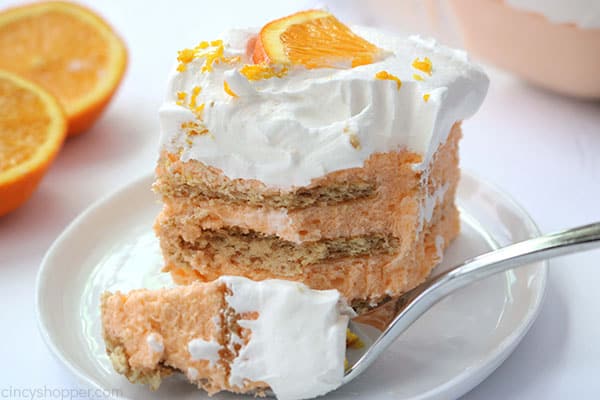 You will want to refrigerate this cake for at least 6 hours. I do add an orange slice to the top to make the dessert look a bit fancy. They are not needed if you do not have any oranges on hand. When you pull it out of the fridge, it will be that Creamsicle Icebox Cake you always dreamed it would be.

Looking for other No-Bake recipes? Be sure to see these other great ideas I have shared on my blog: 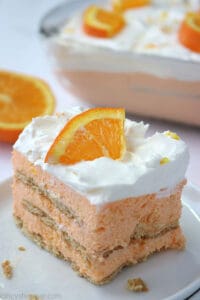 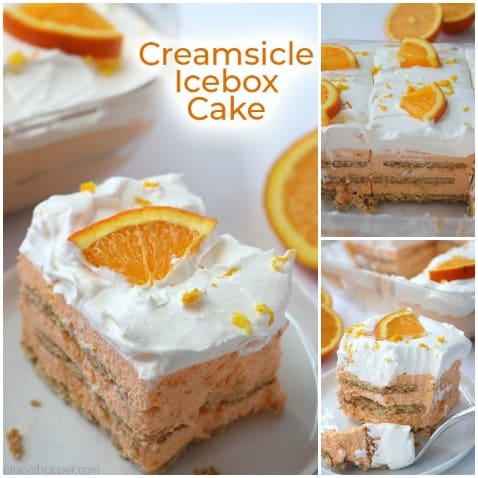